On the evening of Saturday, December 11, EPCOT’s World Showplace Pavilion was the setting for the 24th Annual Don Quijote Awards, a prestigious event recognizing businesses and individuals committed to advancing the Hispanic community in Central Florida.

As in years past, the recipients were chosen by a selection committee that evaluated nominees based on their professional achievements, innovation, success, growth, and contributions within their industries and the community. With that in mind, we are thrilled to announce this year’s winners:

Hispanic Business of the Year (Five Years or Less) – Capella Immigration Law, PLLC: This firm, owned by attorney Camila Pachón Roldán, provides personalized legal assistance to individuals, families, and business owners in all immigration, visa and citizenship matters. Since the firm was established in June 2018, it has served more than 1,000 clients and has grown its staff from two to five full-time employees. Camila has received numerous awards, including the 2019 and 2020 Avvo, Client’s Choice Award; 2018 Board Member of the Year from the Hispanic Bar Association of Central Florida; the 2014 Polaris Star Legal Award; and was selected as one of the 25 Influential Hispanics in Central Florida by HCCMO.

Hispanic Business of the Year (More than Five Years) – Castillo Engineering: With more than 20 years of experience in the market, this company offers full-service design, engineering, and consulting for residential, commercial, industrial, and utility developments. The company is family-owned and operated by father and son, Rick and Christopher Castillo. Since 2018, this dynamic duo has taken the company from a one-man business generating $300,000 annually, to over $4 million in annual sales with 14 employees. This year, they were selected among the Inc. 500 Fastest-Growing Privately Held Companies.

Professional of the Year – Diana Almodovar: Ms. Almodovar holds a degree in Civil Engineering. In 2018, she was appointed by Mayor Teresa Jacobs as County Engineer, making history as the first woman in that role in the county’s 150 years. As an active and engaged member of the community, she works with several engineering organizations such as ASCE, ASHE, APWA, FACERS, and SHPE. She has been recognized by United Way for her contributions to the community as a member of the Orange County Campaign steering committee and by Orange County for her participation in the Leadership Institute and Leadership 2000 programs.

Excellence – Chief Orlando Rolón: Chief Rolón has served the community as a law enforcement officer for more than 28 years. He is the first Hispanic to be elected as Chief of Police for the City of Orlando. He was also selected from the Major Cities Chiefs Association to serve as the eastern region representative for its board of directors. He was recently named as one of the “18 Leaders in a Time of Crisis.” In 2019, he was named by the Orlando Business Journal as a Veteran of Great Influence and was recognized in the Orlando Sentinel’s Most Influential Leaders since becoming Chief of Police. In addition to his many accolades, he continues to bravely serve the residents of the City of Orlando while making history.

Hispanic Community Champion – Clint Bullock: CEO and General Manager for Orlando Utilities Commission, Florida’s second-largest municipal utility. Throughout his career at OUC, Mr. Bullock has led many forward-thinking initiatives, upholding their reputation as The Reliable One. He is an active community member, partnering with educational institutions, government, and many professional organizations. In 2019, he was inducted into the UCF College of Business Hall of Fame for his hard work and dedication to OUC’s customers and the community.

Lifetime Achievement Award – Paul Gamache: A pioneer in the local Spanish-language news market, Paul Gamache is one of the most trusted sources of information in Central Florida and a regional Hispanic icon for nearly three decades. His passion for his work led him to be involved in the entire creative process. He is part of the behind-the-scenes team, participating in the production process, working with executive producers, and reviewing reporters’ scripts. Mr. Gamache has received many accolades throughout his career, including the Emmy Award and the Emmy Silver Circle Award – special recognition for individuals who have devoted a quarter of a century to the TV industry and have made a significant contribution to broadcast media.

The evening also included the opportunity to recognize last year’s award winners, whose success was celebrated during unique circumstances. This year, we did something special by congratulating them once again for their accomplishments and in the traditional gala atmosphere at Disney.

Each year, the event revolves around a particular theme. This year, it was inspired by the Christmas and new year’s eve traditions that remind us of our roots and unite us as one of the greatest Hispanic communities in the U.S.

On behalf of the Hispanic Chamber of Commerce of Metro Orlando and Prospera, we want to thank all the sponsors, collaborators, partners, and volunteers who joined forces to make the 24th Annual Don Quijote Awards a success!

And once again, congratulations to the visionaries and dreamers who received the 2021 Don Quijote Awards. Thank you for inspiring us all to follow our dreams! 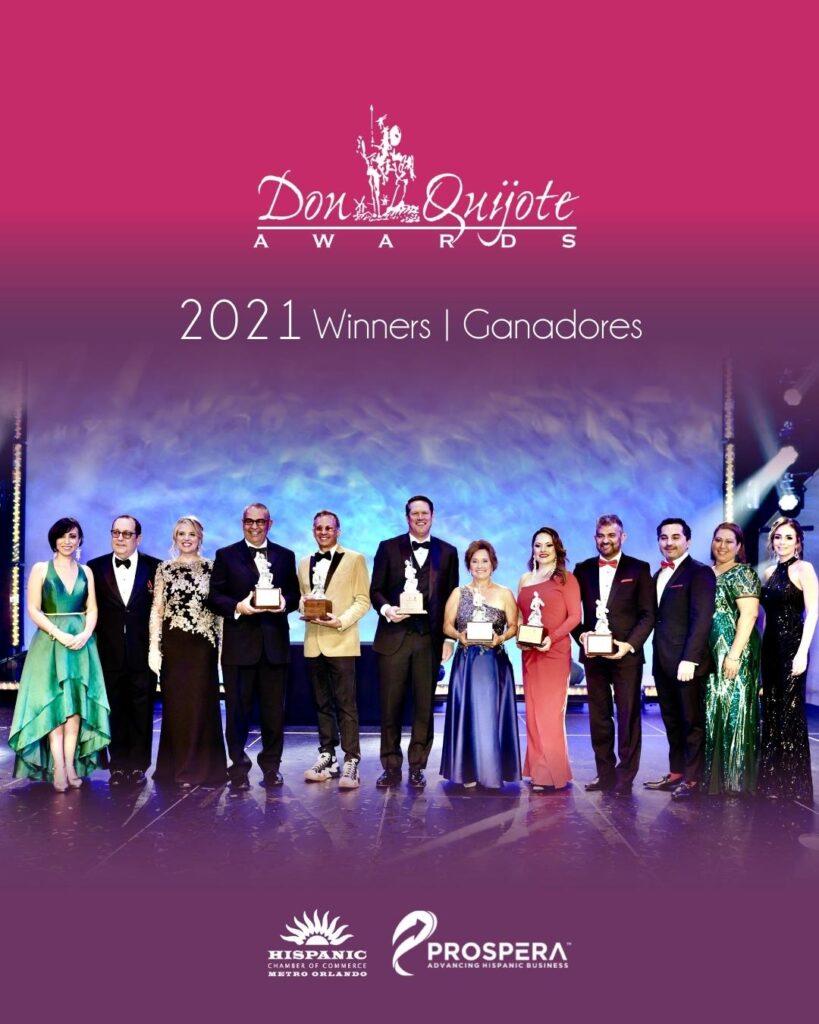